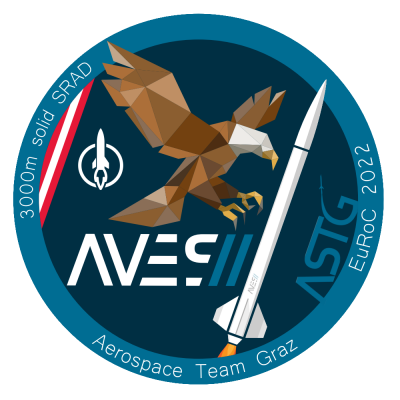 Designed for the 3 km solid SRAD category at the European Rocketry Challenge in Portugal, AVES II maintains the "Student Researched and Developed" philosophy at its core and builds on the knowledge and success of its predecessor AVES.

The payload features three 1U CubeSats, of which two are built entirely by polytechnic high school teams. Thus, we continue sharing our enthusiasm for rocketry with the next generation and maintain the successful cooperation initiated last year.

Moving further down along the rocket, the payload in the nosecone is followed by the Recovery Module, which consists of a two-stage deployment system and relies on a main and drogue parachute.
Located beneath is the avionics section – the brain of the rocket. It comprises the power supply, telemetry system (antennas), camera system, black box, and most importantly, the self-designed and built Flight Computer, which works with an improved version of the self-developed real time operating system RavenOS.
Separated from the Avionics Module by an empty volume, the airbrake provides more precise control after the engine burnout for reaching our target altitude of 3 km.

While the Propulsion Module at the bottom of the rocket continues to be powered by Rocket Candy (mixture of potassium nitrate and sorbitol, KNSB), it has been greatly improved compared to its predecessor and is thus one of the highlights of AVES II. A new production process and design geometry allow the direct casting of a single fuel grain to create a booster with high reliability and repeatability.
Furthermore, a special sensor bay at the top end of the booster enables the monitoring of the combustion process.
All of these modules are integrated into a housing composed of carbon fiber and also glass fiber to ensure radio frequency transparency for communication with the self-developed groundstation.

While AVES II SN-2 already completed a flight at the European Rocketry Challenge 2022 and enabled the team to win the New Space Award and the Team Award, its identical twin AVES II SN-1 is still waiting to be launched in 2023 in its home country, Austria.